Recently the older brother of one of your friends was experiencing some bullying at school. It’s a hard thing to avoid, even in a school as small as yours, where the parents all know each other and the kids have been taught the virtues of kindness and compassion from kindergarden. Perhaps it’s just part of being a kid, something to try on and see how it fits. It made me think of comedian Louis CK’s recent point about not buying cell phones for his daughters. He felt the technology made it all too easy to disconnect from the truth of the real world. If you are cruel to someone in person, you witness first hand how they feel and, how making them feel that way effects you. For the most part it’s not a great feeling for either person. But, when you do it online, silently typing cruel things into a smart phone and pressing send, there is no such bounce back. No moment where you see how your behavior has affected another and, therefore, much less self realization for the bully. Without the emotional fallout to witness, mean for the sake of mean might feel pretty good.

Sidebar: Cyber bullying is a new world for me. We didn’t have smart phones and the internet when I was young and from everything from bullying to dating, I think my generation dodged a big bullet. You, on the other hand have a whole new sphere of ways to hurt one another and people are using it with gusto. You have to be hyper conscious about what you post, who you tag, what you say and what you forward. You shouldn’t share your password with anyone (except your parents) and you have to think, almost more so than you would when you speak, how something you say might be perceived. Those words are never going away. Anything you post will ALWAYS be out there.  Look, it’s easy to be mean but it’s base. It’s not clever or charming and it won’t win you friends or impress anyone worth impressing. It’s a cheap, shallow way to connect with people and you have to work every day of your life to rise above it.

Anyway, this boy at your school was experiencing a lot of taunting. He’d even received threats of bodily harm and as a result had engaged in the occasional physical tussle. By the time I was talking with him he was understandably worn out and angry. The thing is he’s not alone. The girls in your class were recently sat down and talked to about kindness and fair behavior. It seemed there had already been some issues of bullying amongst them (sadly not surprising for girls) and the teachers were looking to nip it in the bud. I’d like to say I’m shocked. Bullying at 5 and 6?! That’s outrageous!! But I’m not. I was bullied mercilessly from age 7 through 9, again at camp from 10-12, the majority of my 8th grade year and then again in the 12th grade.

Bullying happens all the time, to all kinds of people, and it can be at any stage of your life. You can be bullied by your boss, your girlfriend, a frenemy, a colleague. Bullying is everywhere and, at some point in your life, you will have to deal with it. At the end of the day bullying is a misuse of power, a behavior that belongs in the arsenal of the weak. The bully might appear to be dominant but it’s a weak character that chooses this behavior. A truly confident person has no need to belittle or destroy. Only the small have to stand on others in order to feel big.

Looking at the size of you I don’t think people will target you for physical bullying. But, mentally, you are kind and sweet and sensitive and that’s probably going to cause you some issues. I wouldn’t want you to be different. I just think we need to be aware of what being the “good guy” sometimes entails. Your Dad was bullied for being a red head but he was also picked on for being kind to the special needs girl at his school. You can’t win, you just have to deal. Recently you were in tears when a 2nd grader, who’s half your size by the way, was mean to you. Part of me wanted to tell you to punt that twerp across the campus but, even in the heat of the moment, I knew that was terrible advice. Yes, you could exert your size for dominance but that’s no way to handle your problems and frankly, I don’t want you to think that way. I don’t want you physically, or metaphorically, throwing your weight around. I think the best way to use physicality to our advantage is by simply owning our space without apology, and I believe that’s possible whether you’re big or small. Emmenating a grounded sense of self – both physically and mentally – will make you less of a target.

I wish I could say this applied to all bullies, but it doesn’t. Self worth and confidence have a way of attracting a different type of aggressor, the kind that would rather break your confidence mentally than your bones physically. If you find yourself on the receiving end of this type of action – because you sure as hell better not be on the delivery end – all I can say is hold on. Be grounded in your sense of self and wait it out. It’s a tremendous acting exercise. You can feel devastated and destroyed inside. You can want to cry, give up or lash out, but if you want it to stop you have to appear strong in public. Come home and unload but don’t allow “them” the satisfaction of seeing you hurt. I promise the situation will eventually pass but you want to feel confident that, as far as anybody knows, you handled it with nothing but strength and pride. 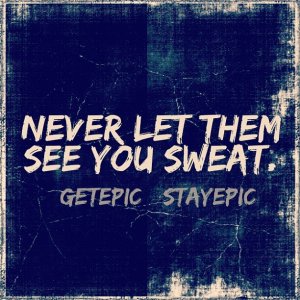 I know from personal experience how hard this kind of bullying can be to handle. How painful it is. How sometimes you’d just prefer to be punched in the face then deal with one more day of someone trying to break you. I know what a toll it takes on your confidence but you have to keep reminding yourself THE BULLIES CAN’T WIN. You have to be stronger than them. No one should make choices for you. No one is allowed to tell you how to feel about yourself or dictate your actions. They can’t defeat you unless you let them, and lest you think you’re all alone you’re not. Bullies have been around forever and personally, I believe life has a way of catching up with them. Whether your bully ends up with no real friends or honest relationships, whether they’re unable to love fully or truly be happy, weak minded, small, petty people pay for it in the end. I know that’s not much to hold on to when you’re in the thick of it, but knowing that fact somewhere in the back of your head might allow you to suck it up for just one more day. There are too many kids who felt they’d rather end it than live with the pain of the bullying anymore. This. Should. Not. Be. We can’t allow ourselves to live in the world the bully creates. We must try with all we have to rise above. Life is too wonderful and precious to forfeit to exhaustion. 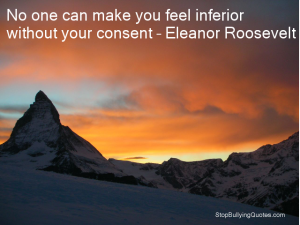 It’s possible as a strong willed, popular guy you’re not going to have to deal with this s*^@, but it’s unlikely. The weak are the frequent victims but the strong are repeatedly targeted for threatening the status quo. Look at Obama. That man’s been bullied for the past 6 years and he’s the leader of the free world. No one is immune and you can’t stop it. All you can do is be strong enough of character to remain the best version of yourself without apology. And if it’s not you who’s being bullied? Is it ok to turn a blind eye lest risk having the bully turn on you? No. It’s not. I lost my entire group of “friends” for standing up for someone else but, even knowing how that played out, I wouldn’t change giving a voice to someone who didn’t. The only thing I should have done differently was go to a teacher first rather than publicly engaging the tormenter head on. It wasn’t the smartest move. But, hindsight’s 20/20 right? The bottom line is you can’t call yourself a good person if you’re able to sit idly by while someone else is getting hurt. You need to know what behavior is appropriate and stick to it no matter what anyone else is doing.

I don’t envy you this stage in your life. It can be tough but, it can also be liberating. It’s the time when you start realizing what you’re made of, who you are, and building the sense of pride and self worth that can last a lifetime. You are a good person Loch. You’re kind and noble and loving. Have enough faith in yourself to rise above the noise. Don’t let anybody change the spectacular person you are becoming.

Tags: bullying, cyber bullying, is my child a bully, my child is being bullied, self confidence, self worth, sticking to your guns, what to do if your child is bullied
From: Letters to my son
← I know I’m the adult here but…really?!
Eye Opener →
4 Comments Post a comment