Before I begin, I’d like to say I’ve been asked to become a regular contributor to the online magazine MoveLifeStyle.com. My article about the prevalence of perfection in today’s cyber world is currently published and I’ll have a political piece right before the election. Please feel free to check it out. Move is a fabulous site well worth the bookmark. xo leigh

Sean and I recently received a letter from some dear friends of ours. It was a lovely card that said “Every Single Day, Do Something That Makes Your Heart Sing”. Inside there was a heartfelt note saying they were thinking of us and how very much we meant to them. They had also included a check for a substantial amount of money. They wrote “In thinking of you, God has put it in our hearts to send you something”. These extraordinary people went on to say it was a “GIFT” to use as we saw fit “medical bills, something fun, whatever”. Their one condition was that we never bring it up. They had included it because they felt the “point of us all being here is to take care of one another and help when we can.” 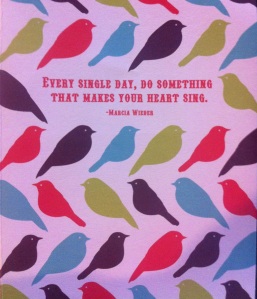 Sean and I were completely floored. We’ve never spoken directly with them about our struggles. Truly only a few family members and an inner circle of close friends are aware of our burdens. Some of our problems might be garnered from this blog but, as a couple, we make a concerted effort to try to outwardly portray the success and solidity we hope to achieve, even when it feels like everything is falling apart. The fact that these incredibly lovely people could sense our distress and felt the need to reach out and help us – in such a meaningful and generous way – was overwhelming.

We are struggling. It’s an uncomfortable time. We’ve never been in such a strong position as far as changing our circumstances – Sean’s producing, my writing – but we’ve also never been in such a tenuous position as far as financial strain. The stress is terrible. I know I should try and relax but I can’t. It can be overwhelming. I feel I have to keep moving. To try harder every day. To just keep all the balls in the air. I know I can’t work any harder, but until my book’s published or I start getting paid to write, I’m not contributing in any tangible way to our situation. I’m simply a super-over-extended-volunteer and the same goes for Sean. He’s back at the bar, which he hates but it puts money into our account, but he spends almost every waking hour working at a job that has yet to garner any financial reward. He’s gifted and driven and devoted to bettering our lives, but everything he does – every audition he works on, every pitch he designs, every layout he creates – he does without a paycheck. I know it’ll be worth it. More than his acting career, which is forever in someone else’s hands, I know producing will work out because how hard you work and how good you are is rewarded in a career where you retain the power. You can be the best actor in the world but never make it. That’s the nature of the beast. However, if you’re the one coming up with the ideas, eventually people will catch on, and then they’ll pay you for it. As far as I’m concerned, the question isn’t whether it’ll all work out, but when, and can we hold on till it does?

Back to the card.

Our first reaction was stunned silence. Are people actually that selfless? They’re not zillionaires. They have their own worries, issues and dependents. Why would they do that for us? Our next thought was that we couldn’t possibly accept their generosity. Sean put it well when he said his “pride hurt”. It was as if their kindness made us feel worse about ourselves. Essentially shining a spotlight on our indignity. We discussed returning the check, saying thank you but no, but wondered if that wasn’t going against the spirit in which it was given. Ultimately, after much soul searching, we decided the honorable thing to do was to accept it. To use it as it was intended, alleviate some of our worries, and when circumstances allowed A: Take our friends out to a fantastic dinner and B: Pay it forward.

The giving of an unsolicited (and much needed) gift has changed us. We will never forget this kindness and we eagerly await the day we can bestow it on another. We hope to do it as our friends have, not for recognition or gratitude, but just to know that we could help and to remind us that despite what human nature often shows, we’re all in this together and if we look out for one another, the world can truly be a better place.

Sean and I feel incredibly blessed. Yes, there’s some shame associated with our current situation, but we work every day to rectify it. For every person that does something horrible like attempt to steal our car (which happened last week and left us with a mangled door and no steering wheel) there’s someone who does something exceptionally kind (like our friend who recently gave Sean theatre tickets because he knew we were dying to see a show but couldn’t afford to go). For every low day we’re left to wonder why it has to be so hard, there’s a brilliant night spent among friends that reminds us what’s really important. I know my parents wouldn’t let me die if I couldn’t afford my drugs or allow us to fall to a place where I had to pull Loch out of school, but I’m also not in the position to fall back on them anymore. They’re no longer able to be my safety net and it’s an incredibly scary awakening. Sean and I struggle every day to realize our dreams while still affording our reality. It’s arduous and humbling but we keep telling ourselves we’ll survive. We’ll survive and it’ll be worth it.

Receiving a check from our friends was a shock, a tremendous blessing of overwhelming kindness, but a shock. Needing or asking for money has always been slightly humiliating and come with a fair amount of strings, but here we were receiving something unsolicited and without stipulation. To return it, simply because it was too kind seemed the wrong thing to do, especially since we can see it as the start of something bigger than ourselves. A chain reaction of compassion that we look forward to continuing.

I don’t often speak about God but I believe he brings people into our lives for a reason and inspires us to do things when we can. He can give us strength and hope and, in this case, he inspired our friends to offer us relief that one day we’ll be able to offer another.

All this reminds me of a story I recently heard about an employee at an Oregon Target. The employee was ringing up a family and when she ran the customer’s credit card it was denied. The man tried another card but it was also rejected. He apologetically moved to the side with his wife and baby to call his bank. The next customer, who had witnessed the transaction, quietly asked to add the man’s bill to her tab. When the employee informed her it was $160, the woman said to do it anyway. She said she knew what it was like to need help. When the man returned to tell the employee he couldn’t pay for the groceries, the employee was pleased to tell him the debt had already been paid. When the family understood what had happened the wife began to cry. They were overwhelmed someone could be so kind. The husband said, “I didn’t have the money to pay my bill but I do have a $20 in my wallet. I’d like to leave it for the next person.” When the next person found their bill had been paid by a stranger they left money to help pay for the next bill, and the kindness continued. The Target employee was so moved by what  she witnessed she posted the entire story on Facebook and it went viral. She said the woman would never know the impact she’d made on so many people, and although not everyone is able to pay someone else’s $160 bill, doing what you can can when you can, can impact someone for the rest of their life.

That’s how Sean and I feel. Not only by the shocking generosity of our friends’ gift, but by the compassion so many people have offered us over time. It’s our hope, that we have in the past, and will continue in the future, to fill that role in other’s lives. We hope to take this lesson in generosity and bestow it on others. We will never forget what it’s like to need help, and how very much it means when it’s given.

Love and thanks to ALL our guardian angels. You humble us. We are better for knowing you.