The Me First Mentality

The world is not the same as it used to be. It’s harder, tougher, more self serving. People don’t take care of each other like they used to, or at least as I’ve heard they did in say, Grand Mimi’s time. Even when Granny was young it seems people were more willing to look out for one another. That’s not to say there aren’t twenty-first century people who give of themselves, but just that it seems they’re more the exception than the rule. Perhaps it has something to do with the fact that my generation never lived through a major coming together like a great war or depression. We’ve faced financial hardship and God knows there’s been enough blood shed for generations to come, but wars over oil or perceived nuclear threats are different from the Great Wars fought for ideology and losing your house because of loose banking regulations is less uniting than the dust bowl and the crash of the entire economy. Those times forced our country to band together to weather a storm. It was a time where people on the home front sacrificed and contributed and the war was the news of the day. These days it feels as if we’ve become complacent, leaving the wars to faceless soldiers halfway around the world, it barely registers in our daily lives. Our most recent conflicts didn’t even raise taxes. We’re paying for it with our hideous deficit, but it’s almost as if we thought we could get involved without really involving ourselves. We’ve become so used to looking out for the individual that we’ve created a culture that celebrates and rewards those who put themselves first.

Lochie, I’m sorry to say that you seem to be growing up in a “what’s best for me?” world. I’m not sure how to advise you to navigate it other than to say try and choose a higher path. It’s fair to wonder how you’ll be able to compete if you aren’t playing the same game as everyone else, but I’m confident it’s worth striving to rise above your most basic nature and attempt to be better than the lowest common denominator. Hold yourself to a higher standard than expected. Ask more of yourself and more of your friends. I often think of this idea when people are shocked by your manners. Fifty years ago, children were expected to behave. A child not saying please and thank you would have been a disappointment, an anomaly. Today, a child that doesn’t bowl you over is a delightful surprise. Often, when we’re with guests or at someone’s house and I correct you for doing something impolite (interrupting a conversation or climbing on the back of their couch) people will say, “Oh, don’t worry about it. It’s ok.” As if the mere fact that you’re not destroying their house is cause to be impressed. My answer to their kind overlooking of your behavior is always, “No, it’s not.” I hold you to a higher standard. I expect you be well behaved and follow the rules. It’s how you were raised and I hope it’s how you’ll continue. 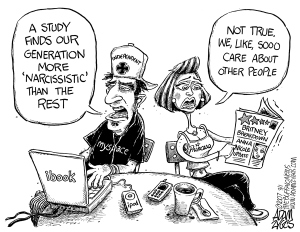 Nowadays more and more people – adults, not just children – somehow feel the rules don’t apply to them. They’ve convinced themselves they are somehow exempt from the standards to which others are accountable. I recently witnessed this first hand waiting for a treatment room at my acupuncturist’s office. A girl came into the lobby with a big golden retriever. My acupuncturist sighed and I looked at him and said, “The dog?”. He nodded and went over to speak with her. The conversation played out like this:

Acupuncturist: I’m so sorry but we can’t have dogs in here. We treat a lot of people for allergies and the pet dander makes it a really tough environment for them.

(Her response should have been something along the lines of, “Oh, I’m so sorry. Of course.” and promptly removed her dog. What actually transpired was an illustration of a society that thinks it’s special)

Dog owner: But he doesn’t like being tied up.

Acupuncturist: You can leave him on the patio. It’s fenced in.

Dog owner: I’d rather just keep him in here.

(At this point I wanted to go over and say, “Hey! This place is no dogs. That includes YOUR dog. The rule applies to YOU. Take. The. Dog. Outside.” But I said nothing.)

Acupuncturist: Um, unfortunately, I really have to ask that you take him out.

Dog owner: What if he runs away? 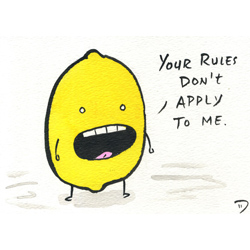 The whole interaction was both ridiculous and representative of everything that drives me crazy about the “Me First” culture we’ve morphed into. Rules are rules. They exist for a reason and you’re not exempt just because of a sense of entitlement or inflated self worth.

I was infuriated in traffic the other day sitting behind a woman making a left turn at an intersection clearly marked (multiple times) No Left Turn. She sat there completely unconcerned with the honking and waited the entire light to make her turn. As I cooled my heels through the next light I grumbled to myself about people who think they can do whatever they want. From the backseat you asked me what I was saying. After explaining the situation, I told you it’s important that you respect the rules that are laid out in life, and even more importantly respect other people. You don’t do something just because you want to. The world doesn’t revolve around you. Frankly, I think you got it, and even more so I think you agreed.

Lest it appear that your mother is simply a wuss to the rules – a cow tower if you will – I should stress I’ve always been an advocate of rocking the system and I think you should challenge authority if authority needs to be challenged. I’m simply of the opinion that you can’t go through your life under the assumption you are special which somehow qualifies you to live under a different set of guidelines. And, yes, I believe that also goes for celebrities who continue to skate their way out of situations the rest of us would be in jail for. If that’s not the worst message to society I don’t know what is. Other people should not have to clean up after you. You’re responsible for your own actions. Blatantly disregarding rules for your own betterment does not make you better, and as you navigate this world I hope you’ll remember that.

Nothing brings this point home more succinctly than a recent altercation your Dad had at work. He was bartending a Laker’s game and a man (who’d already proved himself to be selfish and self serving) tried to remove one of the stools from the bar to put at his table. Your Dad informed him that, unfortunately, the bar’s policy was the stools had to remain where they were. They were for bar patrons only and could not be moved. Outrightly dismissing your father this patron continued to leave with the stool. Again, your Dad stopped him, telling him more firmly this time, he would not be taking the stool. The man proceeded to launch into an angry tirade about how his elderly mother needed a place to sit and what kind of *^#@ wouldn’t give a stool to an elderly woman. Your father suggested the man take his mother to their seats if she needed to sit, but reiterated the seating rules. About an hour later a regular arrived to have dinner with his daughter at the bar. At this point it was very crowded and he asked if there was stool he could sit on. Your Dad looked down and saw one stool was missing (there’s only 7 so it’s pretty easy to see). Knowing exactly where it was and who it was with, he asked his barback to retrieve it. When the barback returned shame faced without the stool your Dad asked what happened. Apparently the same man had told him the stool was needed for his one-armed son who was in the bathroom. The man had asked Dad’s barback if he really expected his disabled child to go without a seat. Your Dad lost it. He left the bar, found the guy and called him out for not having a “sick mother” or a “one-armed son”. Realizing he’d been busted, the guy gave up the stool, but made no apologies for his behavior. When your Dad got home five hours later he was still furious. He couldn’t believe someone would be so despicable as to fabricate a disabled child just to get what he wanted.

People can be disappointing and I wonder with our society’s current leaning towards the celebration of people’s base natures – reality television’s generated fame lathered on undeserving people to the greed of a wall street tycoon who takes a company into bankruptcy but feels it’s appropriate to collect a bonus – if things really have the opportunity to improve. I’m always touched when someone goes out of their way to help me or does something classy like hold a door or send a thank you note. It seems like a glimmer from a lost time, a bygone era, and I appreciate it all the more for it’s rareness. What I’d like to see is proper behavior being less uncommon and it’s my hope that we can find it in ourselves to overcome our grasping natures and remember we don’t live here, or do anything, completely on our own. At the end of the day we are all connected and though personal fulfillment and success are wonderful, collective success helps us all.

Take the extra step. Respect the rules. Use your manners. And unless you’re rushing to the hospital…don’t turn if it says don’t. Honestly, it’s just so ignorant.

I love you. I believe you have it in you to be better than anyone will ever expect you to be.

xo your devoted and ever opinionated mama 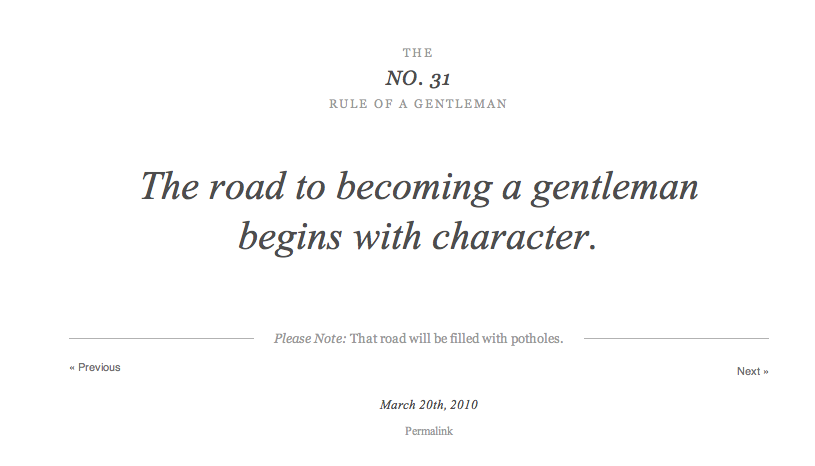