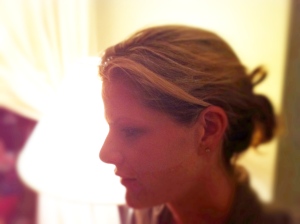 My plan was to post about Boundries today, but yesterday was my baby’s 4th Birthday and today is President’s Day and it’s got me to thinking, so I’ve bumped my prepared post for this, my train of thought on politics in America.

The thing is, where we stand now, it’s a job I wouldn’t want my son to touch with a 50 foot pole. Loch is currently on the “I want to be a policeman” kick, and as much as I hate the idea of him strapping on a gun and doing the honorable, yet hideously dangerous and underpaid, work of a law enforcement officer, I think I’d prefer it to President of the United States. What does that say about our country? 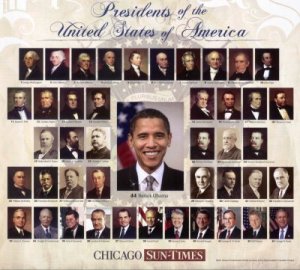 I’m currently awaiting my interview for American citizenship. I’ve been living in the US for 13 years and am only now truly eligible for a passport. I did the work visas. I did the temporary green card after my marriage. I got my permanent green card after Sean and I had been married for 2 years and could prove our marriage wasn’t in fact a scam,and now, after thousands of dollars in legal and processing fees and countless hours of preparing and gathering the right documents and information, I’m finally writing my citizenship test and having my interview in March. I don’t need to do it. I can legally and happily live on my green card indefinitely. The thing is, I want to do it. I love this country. I want to be a part of it. I want to be the same citizenship as my family. But mostly, I want to vote. I want to be part of the democratic discussion. I want to count.

My problem is, will I?

I’ve lived in the country for the past 3 elections, Bush, Bush and Obama, and I’ve become increasingly disillusioned with both the electoral college voting system and American politics in general. From an outside perspective the whole process seems innately flawed. Ignoring idiocies like the “hanging chad” fiasco of the first George W election, I find it perplexing that the person who wins the popular vote (i.e. more people want him/her as President) can lose the general election. The way the states are played against each other, some being worth more than others is, in itself, undemocratic. The way you have to win some particular state to  win the election is, not only confusing, but somehow unfair. I’m sure Republicans in ‘Blue States’ are fed up with feeling like they don’t count, just as Democrats in ‘Red States’ must feel uninspired to get themselves out to a voting booth. It’s kinda like, what’s the point? 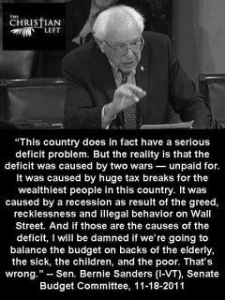 Coming from Canada, I used to think America’s 2 party system made it easier to decide. Less dissemination of votes, made for a clearer cut winner. You don’t end up with a leader, as you can in Canada, who only received 30% of the vote. But now that I’ve lived state side for over a decade, I see that, in someways, this isn’t a great system either. There’s no room for middle ground save candidates themselves that are either left leaning conservatives, or fiscally conservative liberals. America’s become, even more so lately, a ‘my way or the highway’ way of  “representing” the people. The parties are so at odds with each other that, again from an outsider perspective, very little is able to be accomplished. If you hold the Presidency and Senate or House, you can, in many ways, bully your policies through with little, to no, viable opposition. If you hold the Presidency but not the majority in the House or Senate, then you’re a lame duck, unable to do anything but watch your potential policies get debated to death and torn to shreds. This isn’t what’s best for the American public. We aren’t thriving under this system. If anything, we’re in the worst position we’ve ever been in both domestically and globally.

I tell Loch, you have to be flexible, you can’t always get your way, let’s make a deal. Politicians could learn a bit from my preschooler in the ways of listening and compromising. It’s like the leaders of America need a mom to come in and say “Enough! Work this s*#@ out!”  The way the government is running now, it’s as if, politicians are disagreeing for the sake of disagreeing. 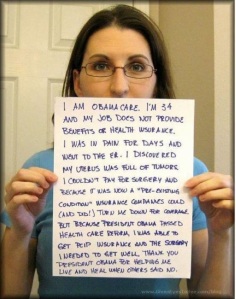 Republicans actively and vocally loathe the Obamacare Health Plan, yet there is no other developed country in the world without some form standardized and subsidized health care for all. People dying because they can’t afford health care shouldn’t happen in a country like this, but nor should the few be responsible for the many. In Canada, you don’t worry about getting hurt or sick because you can’t afford it, you worry because it’s awful to get hurt or sick. Yes, Canadian’s pay a lot of taxes but frankly, we pay a lot of taxes here too. The only people that seem to be getting major tax breaks are the very, very rich and the very, very poor, and like I said in my post School: A Diatribe, where does that leave the middle? We need some compromise. We need our representatives working together. 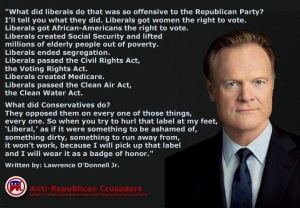 I would skew liberal in today’s politics. Since there is no middle ground, I’d be considered a Democrat. But, I also don’t believe you should have to give away all your hard earned money to the government. I don’t think we need as big a governing body as we have. I think things (and money) easily get lost when there’s too many cooks in the kitchen. I’d like to see less elected officials getting more things done.  I’m pro-a-woman’s-right-to-choose and pro-gay marriage. I’m pro-military AND pro-repealing Don’t Ask Don’t Tell. I’m against an open door policy for all illegal immigrants but I’m pro-immigration. I don’t think people should be asked for their papers on the streets like we live in Nazi Germany, but I do believe they should have papers. As an immigrant myself, I’ve had to go through infinite proper channels and jump thorough hundreds of government hoops to work and live in this country. It’s upsetting to me that I can no longer comfortably send my child to the local public school because of overcrowding, underfunding and the fact that over 68% are non-english speaking students. It’s upsetting to me that the statistics say that by 2035 the most spoken language in America will be Spanish. I’m all for learning another language. Canada itself is bilingual. But what other county in the world has had their primary language changed due to their immigration? If I chose to live in Italy, I better learn to speak Italian. I don’t think it’s too much to ask for a moderate amount of assimilation. 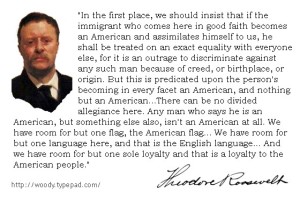 The bottom line is, I come down right in the middle of American politics and I think what we need is to be flexible and work together. Human rights should be non-negotiable. Fiscal, medical, environmental and immigration policies should be up for debate. Compromises must be made.

I said I wouldn’t want my son to be President, and the way things stand right now, I mean it. Look at Obama. Had I been able to vote in 2008, I would have voted for him. I, like many of my generation, wanted to believe in change. I wanted to believe in hope. I wanted to see a new kind of government. One of transparency and working together, where the will of the people dictates policy and the country is not run by a few back room boys wheeling and dealing in Washington. I wanted more FDR ‘The New Deal’ and less wars for oil. I wanted to feel safer from terrorist attacks not like we were asking for it by acting more and more like the gross infidel we’re made out to be. I wanted to see new jobs and less dependence on foreign debt buyers. I wanted to believe in “Yes We Can”. Has Obama delivered on that hope? No, probably not. Does he deserve another 4 years do try and do so? Yes, he definitely does. And not just because the potential Rebulican Presidential candidates range from rich, bland, nothings to appalling, bigoted freak shows, but because Obama has had about the worst 4 years ever to be President. He inherited 2 unpaid for, unpopular wars, the worst fiscal crisis since the Great Depression, near a collapse of the housing and job market and the oil spill in the Gulf, all the while being barraged with inane questions about his birth certificate. When I drive around town and see bumper stickers that say ‘Worst President Ever’, with the O of worst begin the Obama symbol I think, really?! Really?! He ended the Iraq war. Killed Osama Bin Laden. Took out over 30 top Al-Queda leaders. Helped topple Qaddafi’s reign of terror. Closed Guantanamo. Put regulations in place so we can’t be F-ed by wall street and the banks again, and helped avoid total catastrophic financial fallout set up by a number of monumentally, greedy and self serving politicians and bankers. And people HATE him? Hate him? I literally don’t get it. 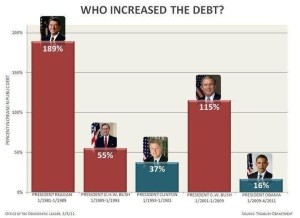 We shouldn’t hate our President. I can tell you I was not a Bush fan, and I didn’t think he was up for the job of President, but since he was President, I felt he deserved my respect and, at the very least, my grudging support. I didn’t agree with his policies but  I believed in the democratic system to work through the issues. But to loathe him with the hatred usually reserved for murders? No. Totally disrespectful and inappropriate. It used to be that a few crazies or zealots might want to kill you if you were President. Now, it’s like half the country. To hate just because. To disagree for the sake of disagreeing. To work against because you simply refuse to work with. These aren’t qualities that made America great and they aren’t qualities that will make America better.

I’m nervous for America’s future. I love it here. It’s the land of opportunity. The land of free and the home of the brave. A country based on the ‘Can Do’ attitude of a frontier people carving their own path. But we didn’t make this country great by working alone. By looking out only for ourselves. Leading this country now is a lesson in negotiating. Negotiating a coming together. The Right has to stop shutting the Left down. The Left has to stop negating the Right. 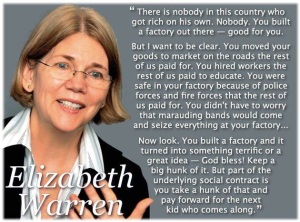 As the quote goes: In War, is it whose Right or who’s left? This country is at war against itself. As we look back at the Presidents, leaders and history that came before, we have to collaborate to move forward. To become a country, American’s came together. To save our country we’ll have to do it again.

Otherwise we’re looking at a civil war of undereducated citizens in a country owned by China.

Why would I want my son to be a leader of that? 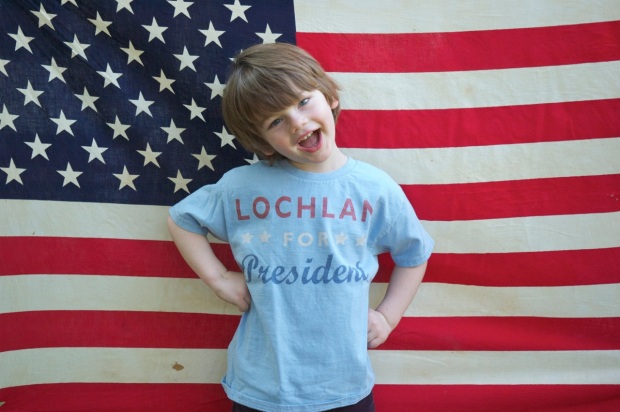