Don’t be a Victim 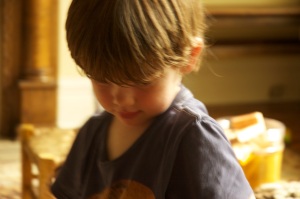 The other day I was talking with someone I know, someone I love and appreciate, but who drives me crazy with their behavior. When I hung up the phone I was so irritated I did something I don’t often do, I gave you a piece of advice that is, for all intents and purposes, completely worthless to you right now. I usually try and keep our conversations kid themed but this situation had crawled so far under my skin that I felt the need to explain it to you despite the fact it’s really a grown up piece of advice. I bent down, looked you right in the eyes, and said,

Me: “A victim is someone who chooses not to stand up for themselves. Someone who lets people walk over them and does nothing about it. It’s like when someone is bothering you, and doing something you don’t like, you can go sit all by yourself and feel sad or you can say, “Hey that’s bothering me. I don’t like it.”

Me: “They might or they might not, but the point is you stood up for yourself and spoke your mind.”

You: “Or I could just come and tell you.”

Me: “You could. But I would try and handle it yourself first. The worst thing you can do is nothing and then be upset about it.”

Yes, I had that conversation with the 4-year-old version of you, but I feel so strongly about this issue I felt it just couldn’t wait.

I think I should clarify that when I say victim, I’m not talking about actual victims of real crimes. Those type of victims have (and deserve) the right to be angry, afraid, nervous, and hesitant. Nor am I speaking to people with mental diseases like clinical depression who need doctors or medications to help sort out their feelings. I’m talking about people who find themselves in a situation in which they are unhappy and shlump around doing nothing about it. “Whoa is me, the world is out to get me”, bulls*^#. The world is not out to get you. Bad things happen. They do. I’m living proof they do. It’s how you live that defines you, and my advice here is not to live like a victim. Stand up for yourself. Speak your mind. Confront problems head on. If you aren’t happy, do something about it.

I believe there are two kinds of victims:

Victim Type One: People who can find a problem with anything, who are always have something to complain about, who can make an issue out of nothing.

These are your classic “victim mentality” people. Those with a victim mentality can range from highly functioning successful people to sad sacks who accomplish nothing. The common thread between these people is the ability to find the negative in any situation and/or that things are always someone else’s fault.

You were invited to a party? Well, there was that other one you weren’t so….

You introduce two people and they get along great? Great, now, you’re the odd man out…

You were included in a dinner? It was just a cc so you were probably an afterthought…

You didn’t get that promotion? No one notices anything you do, what’s the point…

Your relationship isn’t working out? They’re probably bi-polar or having an affair….

You aren’t succeeding the way you want at work? The boss hates you, so what’s the point…

You never get the girl? No one gets me anyway so why take the chance….

Ugh! Get over yourself. Nothing ventured is nothing gained. If something good happens, enjoy it. Don’t look for the one bad thing to fixate on. If you aren’t happy with a situation, figure out what steps you can take to change it and then TAKE THEM! Transformation is impossible if you keep doing the same thing.

Man up. Stop the bitching and make a concerted effort to adjust your circumstances. Will everything work out? No, but at least you’re a player in your own destiny and not some hapless passenger waiting to see how it turns out and being miserable in the process.

Victim Type Two: People who refuse to acknowledge their problems and for whom everything is always “fine”.

Look, everything is not always fine. I could be trite and quote the oft used phrase that fine really means: F*^#ed up, Insecure, Neurotic and Emotional but I think it’s simpler than that. People who say they’re fine are either A: avoiding their real feelings and caught in some self imposed safe zone where being “fine” means they don’t really have to deal. B: lying because they don’t want to get into it or C: truly neither good nor bad and fine is truly the best and most appropriate answer at the time.

For the most part though, it’s A: avoidance. In my opinion avoiders are victims because in their refusal to acknowledge their real situation, they remain sacrificed to it.

I hate my spouse but I don’t want a divorce so I’ll pretend I’m fine. For ever.

I hate my job but I don’t want to be unemployed so I’ll just keep doing it until they fire me.

I’ve made the wrong choices in my life but there’s nothing I can do about it now so I’ll just keep living with them.

One foot in front of the other stoicism doesn’t always work. Sometimes you have to stop and see where you are in order to figure out which way to go. Only then can you keep walking.

Listen, life can be hard. It can be frustrating. People can be out to get you and change is difficult, but to function within a state you can’t tolerate, that makes you miserable and – let’s not kid ourselves – makes you miserable to be around? That’s not better.  Dealing with things can be hard. It can be painful. It can be messy. But changing a circumstance you loathe, being your own advocate, there’s power in that, strength, worth. You’ll respect yourself more and other’s can’t help but concur.

You’re unhappy in your relationship? What changes can you make that might alter the situation? Deal with yourself first. What can you adjust? What can you make better? Still unhappy? Talk to your partner/friend/boss. Be honest. Be forthcoming. They can’t fix something they don’t know is broken. If you can’t do it alone, find an outside source to help – a councilor or a mediator. Listen and understand it’s never all one sided. It’s not all you and it’s not all them. Take the steps required to mend the situation. Put in the effort.  Still unhappy? The good doesn’t outweigh the bad? End it. You’re not doing anyone any favors by hanging on.

Don’t like your job? Are you in the right industry? If you aren’t then change. You’ll never be happy if you don’t like what you do. If you’re in the right industry, do you like what you do? Would you like it if you moved up? Have you asked for a raise? Have you worked harder to get noticed? Have you gone above and beyond? Have you been a team player? Are you friends with people at work? Have you made your ambition known?  If you have, be patient and wait for the opportunities, be vocal about your aspirations, and be focused on what you want. Still unhappy? The problem isn’t work. Something else is bothering you. Look into that.

Got yourself into a situation you don’t like? Made a series of bad choices and now feel stuck living with them? You’re not. Everything can change. For better or for worse, everything is fluid, but real change takes effort. You’re an addict? Admit it. Get help. Dedicate yourself to recovery. You’re overweight? Decide not to be. Chose to make smarter food and exercise choices. Commit to a being a better, stronger you. Every situation has an exit if you’re willing to take it. Do you necessarily want to do it? No. But if you’re unhappy or making others unhappy, then stop pretending it’s fine and adapt.

Be the driver in your own life. Make the decisions. Make the calls. Don’t let life run you over. Don’t let people take advantage of you. Don’t let your circumstances define you. Look, I’m no saint, I can throw down when it comes to complaining. Some things aren’t fair, they suck, and you have to bitch. That’s life kiddo. My advice isn’t to power through everything. If you have to throw a pity party by all means throw it, just make it a short affair. Take the time to be upset, then pull it together. Make a plan to be happy and execute it. Handle your business. Don’t be powerless and wish you weren’t.

You hold the cards. You just have to decide how to play them.

Tags: depressed, life is hard, man up, sorry for yourself, whiner
From: Letters to my son
← It takes a village…
Summer in Canada →
12 Comments Post a comment