There are days that I feel angry. Incredibly angry. Days where I’m not positive or happy or hopeful, but more like cheated, picked on and pissed off. Days when it’s not fair and I can’t convince myself that everything is a blessing. There are days when the world is sucky and mean and I worry I don’t have the strength to handle it any more.

I recognize there are so many people who have it worse than me. People who struggle harder or are burdened with more. People who have to deal with such grief and pain that it’s a effort just to function.  Most of the time I’m able to keep things in perspective, but, anyone who’s ever had to deal with a life changing event/situation will tell you, there are certain days where perspective feels impossible and all you can think about is yourself. I recently had one of those days and, as I sat in my doctor’s office beside a woman on oxygen, her tank puffing away as she struggled to take a deep breath, all I could think was “Please God, don’t let that be me.”

The thing about dealing with something like a chronic illness is that you have to adjust and learn to live within your new perimeters and still function with a sense of peace. This doesn’t mean you’re less scared or sad. It just means you accept that life goes on and you have to as well. When you’re able to do that you have the chance of living a relatively “normal” life. When you put the anxiety and fear aside just enough that you’e able to exist on the same plain as your friends and family. My problem seems to arise when one extra thing goes wrong. It’s like I’ve tamped down my feelings just enough to operate but, if one more thing is added to my bucket it spills over and I freak out, unable to regulate my emotions, and all of my feelings come pouring out at once. The most prominent feeling being anger.

My recent trip to the doctor was one of those times. As I sat beside that poor woman trying to catch her breath, I found myself in a state of extreme agitation. That morning I’d awoken to a, not insubstantial, indent on the side of my head. It looked as if someone had taken their thumb to the area just above my left temple and pushed it and now my skull was caving in. I took one look at that concave hole and just lost it.

The thing is when you hold it together every day, dealing with your death or your finances (owed in no small measure to the aforementioned death) or, your often ludicrously bad luck, you spend most of your time just trying to tamp down your fears enough to play your role (as a mother, or a career lady or, just, a generally ok-ish person) adequately but, seeing that divot in my skull – a possible side effect of a vitamin D/Calcium deficiency due to one of my drugs – was the preverbal straw.

I knew my horror was based more on vanity than mortality but, what I felt was “Give me a f*^#ing break!! On top of everything I’m going to be deformed?! Are you f*^#ing kidding me?! I called my doctor and he had me immediately come in immediately. 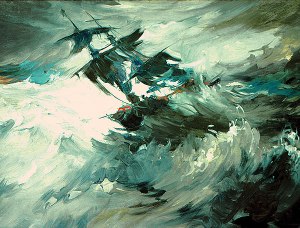 What I feel like on the inside is more like William Harrington’s painting Sea Venture in the Storm.

I put a fair amount of weight into holding on as much as possible to my old life or who I was before I was sick. I find it grounds me so I don’t feel as if I’m about to float away. I know who I am even if I don’t recognize myself as much anymore. Somehow, the thought that I might end up with a collapsed skull, an outward reminder of my inward deficiencies, just really pissed me off. No matter how calm I may appear on the surface, I am debilitatingly angry that this is happening to me and, occasionally, my control slips and my restrain turns to panic.

As I sat through the bone density test and the skull x-rays I started thinking about all the other people in the world who are living with anger and how tiring it can be. We know someone who recently lost her son to cancer. It happened relatively suddenly after years of fighting. Though I have no doubt she’s devastated, my guess is she is also angry. How could you not be? Life isn’t fair. Who gets sick versus who doesn’t seems completely arbitrary. Lovely people die while s*^#ty people live all the time. Bad things happen to good people while hideous people can live perfectly charmed existences.

Our ship coming in courtesy of mother-mel.blogspot.com

Sean and I work every day to try and better our lives. We got pushed seriously off track but, we’re fighting every day to make our dreams a reality. If we don’t make it, it won’t be from lack of effort or skill. It won’t be because we were lazy. It’ll just be.  A while back I broke down and said, “When is it going to be our turn? What are we doing wrong?” I’m just so tired of waiting. I realize what’s important. I see it every morning in my bed with my boys during our morning cuddle but, it doesn’t make me less frustrated. Why does it have to be SO hard?

As it turns out, my skull is not caving in. A number of people saw it so, I can safely say, I’m not going insane but, my skull and bones seem to be holding up under the strain of my meds and the wildness of my mind and today my forehead looks way less like I was just delivered using forceps. I’m back to maintaining and I understand, as the cliche goes, that some days are just better than others.

I look forward to the day when all the effort pays off. When I can truly breath a sigh of relief. When my general stasis can return to calm and I can meet my challenges with the energy to rise above the fear. I’m not an angry person. I’m a person who’s circumstances have made her angry. I await the day where I can just let it go. In the meantime, I’ll keep watching the horizon and trying to stay afloat.

As a side note, the day after I posted this piece Sean’s car was broken into. They drilled a hole right through the door, used a crowbar, then tried to hot wire it. They ended up just leaving with just the airbag from the steering wheel rather than the car itself, but really?! You gotta be kidding me…