I am posting a week early because I believe a post on Halloween will feel less relevant next week. With the election tomorrow, I anticipate there will be other things to discuss than goblins and candy corn. To that point, I’d like to encourage everyone to get out and vote tomorrow. This is an incredibly important election and I hope you’ll vote with both your head and your heart. xo leigh

I love Halloween. I love dressing up. My family loves dressing up. We’re those people. We decorated our house with (mostly) home made decorations on September 29th, we bobbed for apples in our backyard, Sean sewed his and Loch’s costume and we throughly enjoyed everything the holiday had to offer from picking out our pumpkins at the local farm, to Monster Mash playing in our house day and night. We love it all. That’s why, when our trick or treating turned out to be kind of disappointing this year I was bummed. It’s like when you love a book so much and then the ending falls flat. You feel kind of like Meh (and yes, I’m talking to you The Historian).

We were really excited to go out. Halloween night is the culmination of an entire month of anticipation and our expectations were high. This year we were kindly invited to join Lochie’s best friend, his family and some of their extended friends in the tony neighbourhood of Tuluca Lake, CA. It’s a beautiful area, filled with houses ranging from lovely medium size homes to humongous, bohemeth estates of the extraordinarly wealthy. The problem is it also seems to have become one of the “it” places to be if you’re on the hunt for candy and a killer Halloween atmosphere. It’s a full size chocolate bar neighbourhood if you get my drift. We were psyched to be included in our group. We love the family and being there seemed legit because we weren’t just driving ourselves to a cool neighborhood to knock on doors. It’s where our friends ACTUALLY live. It’s also an area I can imagine buying a house, because even with it’s obvious 2%ness, it retains it’s old school neighborhood feel. People know each other, talk to the dog walkers, notice when things seem off and generally seem pretty friendly. So, despite the fact that it, like the rest of the residential streets in the valley, has very few street lights, it seemed to be the perfect place for our little costumed babies to experience trick or treating. 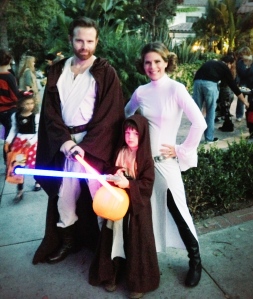 We were a small(ish) group of four families with the oldest being six and the youngest being two. We started our evening enjoying pizza and taking pictures of the kids. Sean and I were the only parents dressed up but, that’s us, and pretty soon the people who didn’t know us understood we weren’t so much weird as enthusiastic and accepted us as such. Around 6pm we started walking the neighborhood while it was still light. From a favorite Disney phenom cum rocker’s house where her staff give candy out in front of her closed gate, to the family who’d deliberately taken their gates off the hinges to make their house look haunted, the neighborhood was fantastic. We crisscrossed the street and the kids were having a ball.

As the darkness came so did the big kids. Personally I think there should be a mandatory cut off on trick or treaters. Just as we aren’t supposed to drink in this country till 21, I think trick or treating should be cut off at 13. If there’s a “teen” in your age, you’re too old. I understand that I sound Grincy (or whatever the Halloween equivilent would be) but if you’re out in big groups with your high school friends and your pillowcases pushing ahead of the little kids you’re doing something wrong.

We ended up at a dead end street called the Tuluca Lake Estates which is basically a mecca for entertainment industry big wigs who do it up BIG for Halloween. One lawn had a life size pirate ship, complete with strobe lights, fake wind and sound effects. Another house, which apparently chooses a new theme every year, capitalized on the love of all things Super Hero and had decorated with dozens of skeletons dressed in destroyed superhero costumes, posed in full battle. Aqua Man held a trident to Superman’s neck. Spiderman had reduced Ironman to a helmet and a pile of bones. Another lawn had at least ten life size ghosts playing ring around the rosie. This one street was like a theme park and it was at once both completely fabulous and total bedlam.

The surrounding streets were bumper to bumper parking. No one could drive anywhere. There was a stretch golf cart tooting around a bunch of mouthy early teens yelling “Move!” to anyone who got in their way. Hundreds of people had obviouly heard about this neighborhood and it was as if they were getting dropped off by the bus load. Every house had a line of at least twenty-five people (often double or triple that) clamering for candy. The home owners (or in most cases their nannies and housekeepers) sat in their driveways or on their front porch behind tables. One house even set up a velvet rope to keep the crowds in check. There was no time to interact. No time for the person giving out candy to say “Oh, and what are you?” No time for the generous homeowners (who were easily spending $1000-$2000 on candy) to appreciate the kids in their costumes. No room for the kids to check out the decorations that had been so elaborately set out for their enjoyment. I would have loved to really look around, to take it all in, but it was all I could do to keep my eye on my little jedi and his pirate friend amidst the dark and the crowds. I took to taking them up to every house, clutching their little hands, lest I lose track of them. The candy line was like a convayer belt and, honestly, it was kind of depressing. 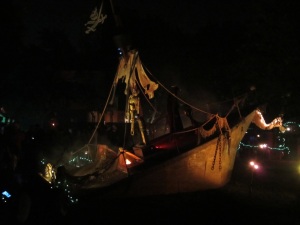 This is literally on someone’s front lawn.

As we were pushed aside by bigger and bigger kids (and I’m talking 13-20 – most just in jeans) I felt more and more irritated. I started saying things outloud like, “There’s a line” and “You’re going to knock a four year old over, really?” For every nice teen waiting their turn who had  put together a cool costume  – big shout out to the Book of Mormon kids who could sing the opening number, the awesome Lisbeth Salander from The Girl with the Dragon Tattoo, and my matching Princess Lea who wanted her picture with me,  you guys were great – there were ten, burly, shouldn’t be out, little jerks jamming up the streets and elbowing their way past the pre-schoolers. When I was young no self respecting teenager was still going door to door. Or, if they were, it was later, after the little kids were done. You didn’t need a watch back then, as soon as the big kids came out, you knew it was time to go home.

This, however, was chaos and I think the ones who suffered most (aside from the parents who looked strung out and tired) were the kids. The boys never let go of my hands. The pirate kept telling me he was scared and my jedi was seriously put out to wait in a line. Loch was asking to go home by the end of the dead end street. It was no longer fun. It was overwhelming.

What happened to trick or treating in your own neighborhood or like us, the neighborhood of your friends? Driving thirty minutes to get to the “right” neighborhood is weird. It’s like dragging your kids to best fishing spot to “catch the big one” when all they want to do is drop a line off the end of your dock. The houses were amazing but we couldn’t enjoy them. Even the people who owned them, and had gone to all the trouble, weren’t getting much out of it. It was an onslaught and probably why they delegated their candy job to the help.

At the end of the day if you asked Loch if he had a good time he’d say yes, he dressed up and hung out with his friends, but as his mother, I know it could have been better. I miss the old days before we started supersizing everything. I missed the purity of watching my kid trip up someone’s walkway to ring their bell. I missed watching from the street as he spoke to the home owner and received his candy. Last year he was a vampire and everyone kept saying, “Oh, look Dracula!” and he’d say, “No, I’m a vampire.” not knowing that Dracula was, in fact, the most famous vampire. I missed him running back to us to show us his goodies and I was sorry not to be able to interact with the other adults in our group without worrying we’d lose track of our children in a mob. Secretly, I even missed my voyaristic love of peeking into other’s people’s homes. We had a lovely time with our friends back at their house but I prefer trick or treating when it’s more wholesome and less commercial. I appreciate the expensive decorations but they come with too many fans. I’m ok with a hand carved jack o’lantern on the front porch and I favor a Halloween that’s more cute superheros and less evil clowns. This year was a perfect example of how bigger is not always better. Sure, Loch came away with a lot of loot, but he was happiest when we got home and he was able to hand out candy and play with his friends. He felt safe there, and in that happiness he could finally relax and just enjoy the holiday he loves so much.

I couldn’t agree with him more. 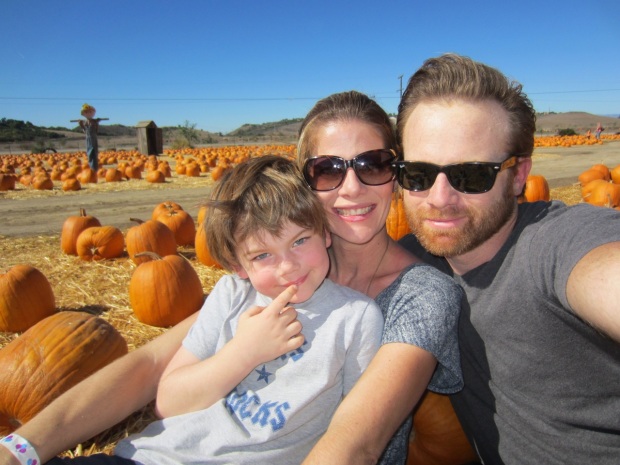 Tags: best place to trick or treat in LA, Halloween chaos, holidays, mobs, supersizing, teen trick or treaters, when are you too old to trick or treat
From: Open thoughts
← Deliberate Acts of Kindness
Being a Parent versus Parenting →
3 Comments Post a comment