Parenting in this Particular Presidency 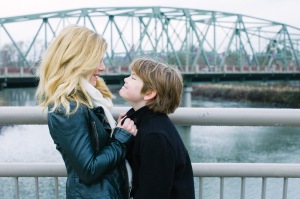 A picture of you from the most recent Women’s March just went viral. I have no idea who took the picture, who posted it, nor am I familiar with the sites on which it has made such an impact and yet, despite the trolls and their horrifying comments, I have to say, I’m glad it’s out there.

I believe your sweet face sitting so proudly on your Dad’s shoulders holding your homemade sign makes a clear and visceral statement about how our family, and many other families, feel about our current political leader. It’s not a rude sign. There’s no profanity. There’s nothing disrespectful to those on the other side of the aisle. It’s simply a statement of fact presented by the innocence of youth and, sometimes, amidst all the yelling and finger pointing and lying and bending of the truth, that’s all you really need to make your point.

When you and I sat down to make our signs I offered you a selection of options and this was the one you chose, the message that spoke to you, the one you could most honestly get behind and, I have to say, I don’t think you could have made a better decision.

The thing is, no matter who you voted for, the sign speaks to you. Whether you loathe the man or worship him, the message resonates. It doesn’t matter if you are ashamed and horrified or truly believe he’s “Making America Great Again”, this particular sentiment in the hands of a child makes you think and, I believe, that’s why it’s made such an impact.

The people who voted for this President have not elected a Leader. A Chairman of the Board maybe, a TV star for sure but, not a Leader. Not someone to look up to or aspire to be. Not someone who brings people together and solves problems. Not someone to respect or hope to emulate and, you have to admit whether you support him or not, you wouldn’t want your kids acting like him. To have them out in the world calling people losers and refusing to work with others? An untrustworthy person who say one thing one day and the complete opposite the next? No one wants to raise an whiny, self serving child who takes zero responsibility for their actions and blames their shortcomings on everyone else. And there isn’t a single parent out there who would proudly admit their offspring was a bully and a liar who believed people were disposable as soon as they couldn’t do anything for them.

No one wants to be the parent of the kid who pushes people out of the way so he’s in the front of the picture.

You have to watch out for people who have no real friends Lochlan. People who insist everyone agree with them and demand “loyalty” above all else. If you want people to respect you have to respect them. You aren’t better than anyone and you certainly can’t go around telling people you are. You’re not allowed to call people names or look down on those who haven’t had the same opportunities or luck as you. It’s what you have to give to the world not what world is expected to give to you.

It’s no secret I’ve been uncomfortable with this Presidency from Day One. For an extraordinary amount of reasons I believe this particular government is absolutely unfit to lead the country but, at the core of it, I think I deeply loathe the idea of “America First” and the foundational conceit that America is the “Greatest Country in the World”.

Don’t get me wrong, I love the United States. I actively chose to be a citizen of this wonderful country. To leave my beautiful, safe, gun-hesitant, health care providing country of Canada to live and raise my family here. I adore what America is supposed to stand for, what it should represent. I will forever defend the ideals of truth and justice. I believe wholeheartedly in the pursuit of happiness and the idea that with enough hard work anyone from anywhere can make it to the top. I honor the Founding Fathers and their dream of a government “of the people, by the people, for the people”. I believe in this land of freedom, innovation and acceptance with the Statue of Liberty on it’s shore and the melting pot of cultures, causes and colors that make up it’s citizenship.

But we don’t have that anymore. Not under this leader. Not the way he behaves.

Imagine a child who marched onto the playground and said, “Yo, I’m here! I’m the richest, the biggest and the most powerful and I’ll be looking out for me. If you need my help, I’ll consider it if you offer me something good in return. If you get into fights I’ll intervene and decide who wins. Everyone needs to remember that I’m the greatest and the best and the most important and, if you don’t agree, I’ll destroy you. Also, you’re ugly and stupid and you’ll never be as good as me.”

Do you like that guy? No you hate that guy. Everybody hates that guy. Well, America is currently that guy. We’re basically the country equivalent of the lead asshole from the Karate Kid swanning around flipping our blond hair, treating women like s*&^ and kicking stranger’s asses for no reason.

That behavior is gross from a kid but it’s completely intolerable from a country.

Power must be balanced with humility. If you have more than most you must fight the conceit that could so easily overcome you. You must be grateful for the gifts and luck and help that got you where you are. You must look out for those who are weaker and use your power to help whenever you can. You may be truly remarkable and impressive but, swagger and vanity are deeply unattractive.

Nobody likes the guy screaming “I’m number one!”.

You should be able to look up to the President Lochlan or, at the very least, respect the office. You should be inspired and influenced by their desire to serve. You should hope to have a world leader whose qualities you’d want to emulate or aspire to but, sadly, that is not the world you’re growing up in. If you behaved like our current President, I’d be absolutely furious and truly disappointed in you. Just as I am in the man currently occupying the Oval Office.

You’re not even ten and you already have better morals and values than the leader of the free world. You respect people, people trust you, you admit mistakes, you seek forgiveness and you continue to learn.

No, you are not allowed to act like the President. If anything, he should act more like you.

Tags: best signs from the women's march, politics girl, Trump, US government, women's march, women's march 2018
From: Letters to my son, Uncategorized
← American Democracy is Worth More Than One Man’s Ego
7 Comments Post a comment